There appeared an abnormal situation of frequent automatic control restart in a SABRE500 machining center of Cincinnati company of the United States, the intervals became shorter, from months to minutes, even continuous. Due to its irregularity, repair was very difficult. Checked from NC, servo to I/O, still could not find the cause of the fault, the machine was in a state of ‘paralysis’.
The machine, with a GE-Fanuc 18i-M control has been used for about ten years. The circuit diagram of the system and power supply is shown in Fig.1 and Fig.2. (for convenience, kept the original style). 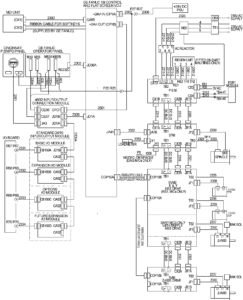 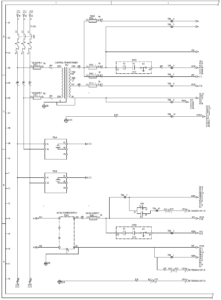 The power supply of the control is provided by +24V via CP1A. Firstly, checked the wiring and connector to eliminate the possibility of poor contact.
It was known that the 24V power supply module had been replaced for many times, and has a capacity with large margin. In order to further confirm, two of them were taken out and a piece of resistance wire (1kW) was used as load. The static load capacity was measured to be above 5~6A. However, the fuse FU9 of the machine tool for all the load of +24V power supply is only 3A, so it was considered that the power supply can basically meet the requirements.
To locate the fault, disconnected the load one by one to observe the system response. After repeated tests, it was found that the system would not restart when all plugs of VDU except CP1A (or CA55, CK2 on MDI, JD36A, JD1A, COP10A, JA41 and CP1B) were pulled out, but would as long as CP1B was plugged in, even when the remaining plugs (CE56, CE57, JA3, JD1A, JD1B) on 48/32 I/O board were pulled out. Therefore, I/O board was judged to be poor.
Exchanged the I/O boards with an ARROW500 machine (with the same model, A20B-2002-0520/02A), the failure was still the same, but the ARROW500 was still working normally, indicating that the board was normal.
So far, it was considered that the 24V power load of the system has been in a critical state. Although it does not exceed the load capacity range of the power supply (FU9 seemed to have not been fused and replaced), it sometimes causes system restart.
Since the 24V power supply has no obvious heavy load and feeds quite a few branches, decided not to check one by one any more, but to add additional power supply module to the control. For convenience of the connection made changes to the circuit shown in Fig.3. The +24V power supply of the control was disconnected from TB4-46, and TB4-46 was then connected to the 0V output terminal of the original 24V power supply through the new relay coil CRp, and its normally open contact controls the new power supply to the control. Pay attention to the joint of the 0V terminals of the two power supply modules, i.e., “common ground”, to ensure the correct closing of each circuit.
After renovation, the machine tool worked stably.