New CNC machine tools, such as milling centers and lathes, must be tested and adjusted according to the agreement after installation and commissioning, which is a necessary procedure for qualified acceptance. Regular or irregular testing has been made, if the accuracy loss is serious, the machine needs to be overhauled, transformed or scrapped. This has become one of the contents of many enterprises’ quality assurance system. In addition, the accuracy of machine tools should be checked and improved after serious fault to ensure machining quality.
It is usually difficult to detect, adjust, restore or even improve the accuracy of machine tools, which requires a lot of experience. But Renishaw’s ballbar instrument makes it easy.
QC10 dynamic ballbar system is the latest product of Renishaw precision calibrator for CNC machine tools. It is a precision instrument to evaluate the dynamic contour precision of machine tools. This technology has been quickly adopted by international machine tool inspection standards, such as ISO230 and ANSI B5.54.
The instrument consists of a precision rod with a precision ball at one end and a dynamic positioning precision ball seat at the other end. The rod itself is a linear displacement sensor. It is precisely installed between the worktable and the spindle of the machining center or between the tool rest and the spindle of the lathe. Then the machine tool performs circular interpolation motion, and the deviation error between the interpolation trajectory and the best fit circle is measured by the sensor. The instrument also has optional accessories for radius calibration to calibrate the length of the rod, so as to ensure the high accuracy of the instrument. 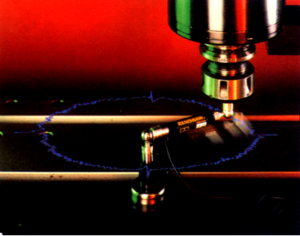 Fig. 1 Installation of ballbar instrument on milling and lathe machine

This fast and simple detection can provide the data of various errors of machine tool, analyze them automatically, and give various error optimization tables. It includes:
Overall contour non-circularity error
Servo gain mismatch error
Periodic error of ballscrew
Creeping error
Machine tool vibration
Perpendicularity Error
Grating ruler/encoder error
Clearance and other commutation errors
Straightness error
Reversal spikes.
We have applied this type of ballbar instrument to the inspection and maintenance of more than 20 imported and domestic machining centers and lathes with different controls and different precision, and achieved some results. Here are two examples.
Ex. 1: The X-axis of a German FP5CC/T 5-axis machining center sometimes made abnormal noise. The XY plane was detected by the ballbar instrument, and the results are shown in Fig. 2. 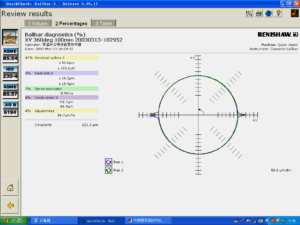 It is clear from the test results that the circularity is poor, which is 121.2μm. According to the experience, when this kind of high-precision full closed-loop machine is normally used, its accuracy should be in the order of micron. The main reason is that the reversal spikes of the X-axis are larger, and the positive and negative spikes are 98.0μm and 103.1μm, respectively, the error of which accounts for 47% of the total roundness error.
The analysis of the reasons for the reversal spike error of the testing software is as follows:
• An inadequate amount of torque has been applied by the axis drive motor at the axis reversal point causing it to stick momentarily at the reversal point, as the frictional forces change direction.
• The servo response time of the machine is inadequate on backlash compensation. This means that the machine is unable to compensate for the backlash in time; causing the axis to stop while the slack caused by the backlash is being taken up.
• Servo response at the crossover point is poor, causing a short delay between the axis stopping movement in one direction and starting movement in the other.
Recommended measures:
• If your machine has a controller with a spike removal capability use this facility to limit the effects of reversal spikes while using the machine.
• Attempt to identify a machine feedrate on the machine at which the effects of reversal spikes are minimized by performing a number of tests at various machine feedrates. Use the best feedrate identified for finishing cuts during circular interpolation.
Because the reversal spikes were too large and accompanied by X-axis abnormal sound, first checked whether the X-axis mechanical motion system was normal. It was found that the X-axis screw nut was partially damaged and loose, and could not be disassembled or adjusted. The machine was imported from Germany, and had been purchased for nearly ten years, so it was difficult to replace the screw nut pair. Inserted copper sheets with suitable shape and thickness into the gap between the screw nut pair while checking the effect with the ballbar instrument. The data was read, and the copper sheet thickness was corrected. After two or three repetitions the circularity had been reduced to 18.3μm, the reversal spikes X was positive 9.3μm, negative 13.4μm, and the abnormal sound disappeared.
Ex. 2 A domestic TH5632D vertical machining center was reflected by the operator for not milling round shapes well. The XY plane was detected by the ballbar instrument, and the result was shown in Fig. 3. The circularity is 91.3μm, but according to experience, FANUC 0 series semi-closed loop machine tools like this kind usually have a circularity between ten to thirty microns when leaving the factory. The main reason for the poor roundness is unequal backlash in Y-axis, which is positive 48.7μm and negative 9μm, which accounts for 33% of the total roundness error. 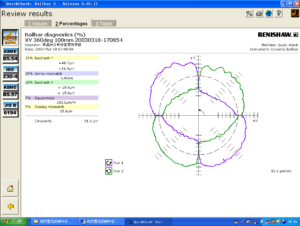 Fig. 3 Testing results of ballbar instrument when circle milled by TH5632D vertical machining center was not round enough

The cause of unequal backlash is as follows:
• An excessive amount of windup in the ballscrew is causing a backlash effect. This depends on the position of the axis relative to the driven end of the ballscrew, which causes the unequal backlash type plot. Machines with backlash compensation may be adjusted to ‘average’ this difference, resulting in the opposing steps. The windup may be caused by a stiff or worn ballscrew, nut or guideway. This type of backlash is common in tests involving vertical movement, due to counterbalancing effects.
Recommended measures:
• Remove any backlash compensation which is applied to the machine. This will allow the extent of the problem to be assessed.
• Check the ballscrew and guideways of the machine for signs of wear. If necessary maintain or renew these components.
• If unequal backlash plots are the result of tests involving vertical machine movement, then the counterbalance is likely to be the source of the problem. Adjust the counterbalance system of the machine as required.
The Y-axis ballscrew was inspected, and it was found that the ballscrew nut was seriously corroded due to metal chips and coolant entering the protective sleeve. After replacement, the test results showed that the circularity was 28.8μm, the Y-axis unequal backlash was still the main factor, the positive and negative direction were -21.9μm and -22.6μm respectively, accounting for 34% of the total roundness error.
Adjusting the parameter of Y-axis backlash made Y-axis change from unequal backlash to negative backlash (Backlash-Negative), both positive and negative backlash errors were -10.1μm, which became a secondary factor. At this time, the circularity was lowered to 22.5μm, which met the machining requirements. Of course, the X-axis could be adjusted to further improve the roundness index.
QC10 ballbar instrument system is precise and compact, easy to carry and operate and fast to test. It is really a powerful tool for inspection, adjustment and maintenance of CNC machine tools.